Marijuana legalization is looming in Canada, but what's in today's weed — and what isn't — may surprise you.

CBC's Marketplace looked into the marijuana market ahead of the legalization of recreational pot, which is expected to be introduced through legislation in spring 2017 and to take effect in 2018.

When producers visited seven Toronto dispensaries and collected 12 of the most popular marijuana strains, laboratory test results showed average THC levels of around 20 per cent. THC is the active ingredient that provides pot's high.

Some strains reached as high as 30 per cent THC, much higher than pot in the 1970s, when levels in Canada hovered between two to eight per cent, according to Jonathan Page, an adjunct professor of botany at the University of British Columbia.

Study after study points to the attributes of combining THC and CBD. The science isn't settled, but  research suggests CBD can mitigate some of the negative effects that can happen with high-THC weed, including anxiety, paranoia, and psychosis.

CBD is also the focus of much research on possible medicinal benefits in treating everything from childhood epilepsy to schizophrenia and arthritis. 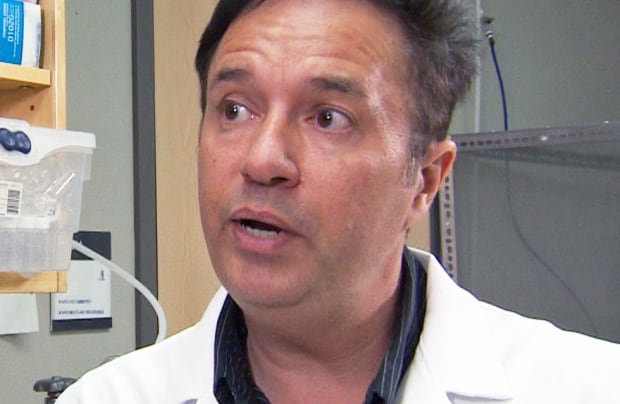 Dr. Steven Laviolette, a neuroscientist and one of Canada's top researchers into the effects of marijuana on the brain, says the lab findings are cause for alarm.

"There's basically nothing to put a brake on the psychological and neurophysical effects," he says of the findings.

Laviolette, who is based out of Western University in London, Ont., has spent 12 years researching the effect of marijuana chemicals on the brains and behaviours of adolescent rats. He found that when the teenage rat brain is exposed to high THC levels, it can produce paranoia, or even schizophrenia-like symptoms in the animals. CBD, however, can reverse schizophrenia-like symptoms, according to his research.

Buying pot on the spot

The Toronto-area dispensaries whose products Marketplace tested were chosen at random, but each of the selected shops allowed customers to buy marijuana on the spot.

Several locations had the veneer of medical dispensaries, with many requiring customers to fill out medical history forms. One location described itself as a recreational dispensary and only required proof of age to enter. Like all the other dispensaries Marketplace visited, the minimum age at that shop was 19.

Marijuana dispensaries in Canada are operating illegally, but are widespread.

The samples were sent to an accredited lab to test for THC and CBD levels.

Half of the samples (six strains) came labelled with their THC content — ranging from 13 to 23 per cent. One sample included a CBD percentage, listed at one per cent.

Testing showed that many of the labels were not accurate; only two of the labelled samples fell within one percentage point of what was listed. And many of the samples contained more THC than listed.

For example, one sample said it contained 13 per cent THC, but testing showed it contained 18 per cent. Another sample contained only half of what was promised. Of the unlabelled samples, THC content ranged between 15 and 30 per cent.

None of the samples contained a detectable level of CBD.

Will 'high-potency' products be regulated?

Dr. Mark Ware, an associate professor of family medicine and anesthesia at McGill University, who is serving as vice-chair of the federal task force on the legalization and regulation of marijuana, says there's some suggestion that cannabis has been bred to boost THC levels and push down CBD levels.

CBD, he notes, "hasn't been of interest to the recreational market or growers because it doesn't cause that euphoric potential.

Ware, who thinks more research is needed on the interaction between THC and CBD, says in a "perfect world" buyers would have access to a "sort of fingerprint of every cannabis molecule, every cannabis product."

When asked whether he thinks CBD should be in all marijuana, he says he's interested to see how "CBD and THC levels play out in a recreational, non-medical framework." But he says it's "way too early to recommend" to make it a requirement, citing the need for a better understanding of cannabidiol.

Health Canada told Marketplace in an email that the task force has been asked to advise on whether there should be limits on THC potency, or on "high-potency" marijuana products.

The task force has yet to release its recommendations.

"But we've talked about regulating the ingredients of the product so that people know what's in it, regulating the potency, regulating the quality," says Ware, who also directs clinical research at a pain management unit at McGill in Montreal.

How to decide who is old enough to buy?

Also on the legalization task force's agenda? The minimum age to buy legal marijuana, which is expected to be between 19 and 25.

Laviolette says there will surely be quibbles about what the exact minimum age should be, but he cautions that teenagers are particularly vulnerable.

Ware, the task force member, agrees that marijuana can be harmful to the developing brain, and argues that legislation can help.

"Regulation includes education," he says, and will offer both young people— and adults— a better understanding of what's known about marijuana use, and what science is still trying to sort out.