Feature: Bats may hold the key to vaccines for future pandemics

Frozen bat tissues and bat droppings could hold the answer to stopping the next coronavirus pandemic.

Researchers at Western University are hunting for coronaviruses endemic in bats that have the potential for animal-to-human transmission. Rather than set off on a journey around the globe to look for bat coronaviruses, they have teamed up with biologists at the Royal Ontario Museum (ROM), which already holds thousands of frozen bat tissue samples from around the world.

In Western’s state-of-the-art Imaging Pathogens for Knowledge Translation (ImPaKT) Facility, the team hopes to use the coronavirus types that they identify in bats to develop a bank of vaccines that could be at the ready for the next pandemic. 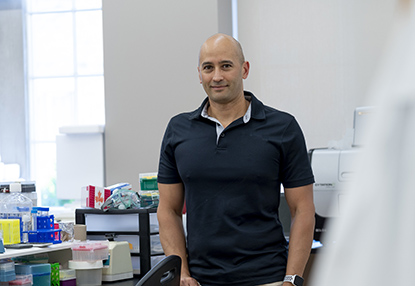 “Our goal is that when the next coronavirus emerges in the human population, we can do a quick screen of our bank to identify the specific vaccine that would have protective measures against the virus in the lab,” said Stephen Barr, PhD, Virologist at Western’s Schulich School of Medicine & Dentistry.

During the past 20 years, there have been three coronavirus epidemics in humans: severe acute respiratory syndrome (SARS) in 2003, Middle East respiratory syndrome (MERS) in 2012 and now SARS-CoV-2, the cause of the global COVID-19 pandemic. Ryan Troyer, PhD, Virologist at Schulich Medicine & Dentistry, says all of these viruses appear to be related to viruses found in bats, and that as humans are increasingly encroaching on wildlife habitats, there are more opportunities for animal-to-human virus transmission.

“When you put all of these things together, there is reasonable likelihood of animal-to-human transmission of another coronavirus in the future,” said Troyer. “So, our project is aimed at preparing for this eventuality by generating vaccines for the diverse coronaviruses that are present in nature, particularly focusing on those from bats.”

“It became obvious that such an extensive collection of frozen bat tissue could contribute directly to our COVID-19 project, and improve our knowledge of coronaviruses,” said Fenton, world-renowned bat biologist, Professor Emeritus in Western’s Faculty of Science and Research Associate at the ROM. “It presents a huge opportunity to share our knowledge of bats with a group of virologists working on coronavirus pandemics.”

Since the late 1980s, the ROM has been collecting and freezing mammal tissues in liquid nitrogen during fieldwork expeditions in order to study taxonomy and genomics. In the frozen tissue collections, the bat samples alone contain nearly 15,000 specimens representing 15 of 21 families, 120 of 220 genera, and 400 of 1,400 species from 30 countries. Along with traditional museum specimens, this makes the ROM’s bat collection one of the best in the world. 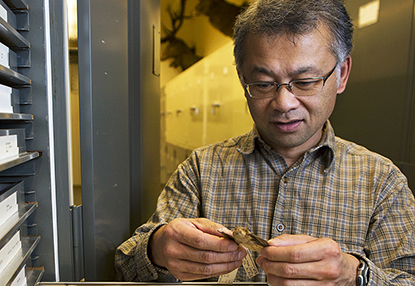 "Built up over many years of fieldwork researching bats, we have amassed a comprehensive collection of tissue samples from different species and countries, including bats from China,” said Burton Lim, ROM Assistant Curator of Mammalogy. “Our tissues, initially frozen at -196°C, are turning into valuable resource for documenting viruses and helping us understand how to fight COVID-19 and new emerging diseases in the future."

In the lab, the Western team is beginning to sequence the viruses found in this enormous variety of samples to determine which are most likely to cause disease in humans. They can then take those specific viruses and isolate the unique spike genes, which will form the backbone of a vaccine.

The team hopes to create a bank of these vaccines that could be distributed quickly when the next coronavirus begins circulating in the population.

“Imagine if we had something like this when the outbreak first occurred in Wuhan in December 2019,” said Troyer. “A vaccine could have potentially been rapidly deployed to that area before it spread widely and maybe could have headed this off before it became a pandemic.”

The team’s work is funded through a grant from the Canadian Institutes of Health Research.