Medical student Angela Huynh spent her entire PhD studying a protein called platelet factor-4 and its role in causing a rare blood clotting disorder. This was before COVID-19 was a household term, and long before vaccines against the virus were even in development.

Huynh says it was an amazing coincidence that this same protein is the one implicated in the blood clotting that occurs in rare circumstances after the Astra Zeneca vaccine; a finding that she published alongside her coauthors this past summer in the prestigious journal Nature.

“Much of the COVID-related research was being accelerated, so when we made this discovery, it was the fastest paper we ever published,” said Huynh, Medicine Class of 2023. She says the entire process from data collection to publication took about six weeks, when typical research papers can take years to publish.

The research was done at McMaster University where Huynh completed her PhD. Early in the days of the pandemic, she rejoined the lab as a research assistant part-time to help with COVID-19 related research. Although it meant balancing the completion of her first year of medical school, her second-year studies and research, she felt drawn to find a way to contribute. 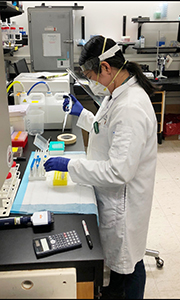 “When they reached out to ask if I was interested in doing some projects in the lab, I didn’t hesitate. I was motivated by wanting to be able to do something to help with the pandemic and add to the body of evidence related to COVID-19,” she said.

When the first cases of Vaccine-Induced Immune Thrombotic Thrombocytopenia (VITT), or blood clotting after the Astra Zeneca vaccine, were identified in Canada, Huynh and the team began searching for the mechanism causing it to occur. Her PhD work centred on a similar blood clotting disorder that occurred in rare cases after the administration of a blood thinner called heparin. The team quickly realized that the same mechanism causing the heparin-induced blood clotting appeared to be the culprit in VITT as well.

“When the cases of VITT linked to the Astra Zeneca vaccine started, I never thought it would be similar to my PhD,” she explained. “It was such a coincidence that the one protein that caused the problem was the one I spent all of these years studying.”

Huynh was first drawn to the biomedical sciences because of her love for research. Working alongside physicians in a translational lab opened up her eyes to the role of clinician-scientists and was the first spark that piqued her interest in pursuing medicine. However, it was feeling helpless to help her grandmother after she had a stroke in Vietnam that cemented her desire to go to medical school.

“That moment was transformational for me, and drove me to want to take a more active role in medicine.”
Now into her third year of medical school and embarking on her clerkship year, she is stepping away from the wet lab, but hopes that the work that she published as part of this research will help clear up the misinformation and can be applied to future treatments.

“If we know how and why this occurs it can help dispel some of the myths. It can also inform how we can properly treat VITT when it occurs in places where the Astra Zeneca vaccine is still being used,” she said.