When Dr. Rachelle Beanlands started clinical rotations as part of her medical school training, how and if to discuss her sexuality with her colleagues weighed heavily on her.

“I spent a lot of time thinking about whether I should be out or not and if discussing my sexuality was even relevant,” Beanlands, MD'20, said. Having a group of peers and faculty members who were also part of the LGBTQ+ community to discuss these uncertainties helped to lift some of that weight. “Knowing that everyone is comfortable and everyone knows who you are and knows you are out was freeing and liberating for me.” 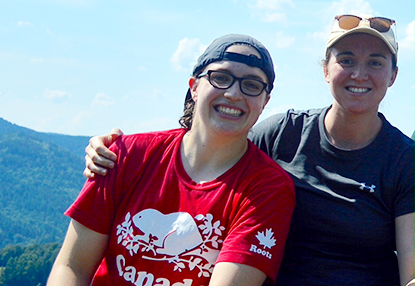 This community of LGBTQ+ medical students and faculty was brought together when Beanlands and her classmate Dr. Lily Robinson, MD’20, formed the LGBTQ+ Mentorship Program during their second year at Schulich Medicine.

Beanlands and Robinson are now both completing residency training outside of London, and say their positive medical school experience is owed in part to the friendship they forged with each other. They hoped the mentorship program would create that same sense of belonging for others at Schulich Medicine as well, and to provide a safe environment for self-expression.

With the help of faculty lead, Dr. Shannon Venance, the program matched LGBTQ+-identifying faculty members and resident physicians as mentors to medical students. The mentorship relationship was forged differently for each group of mentors and mentees and included informal check-ins through email, meet ups and group events.

“There was something really collegial and really moving about the whole thing,” said Robinson. “There was an amazing energy in the air knowing that you were surrounded by people that had similar experiences. For the students, there was this real sense of relief and hope that there was a space for them in this field.”

Across the board, LGBTQ+ people tend to be overrepresented within a population of individuals who suffer from various mental illnesses, and research shows that LGTBQ+ medical students also experience disproportionate harms including a perceived sense of discrimination and isolation. Beanlands and Robinson wanted the mentorship program to help address some of those concerns. 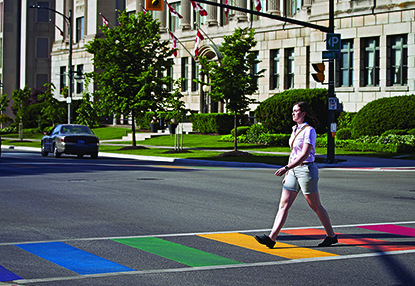 “There is an underlying uncertainty about how free you are to express yourself and whether or not its safe to do so,” said Robinson. “I personally made the decision to come out in all my letters when I applied for residency because it was very relevant to why I wanted to be in family medicine and why I wanted to serve marginalized groups, but that was a major stepping stone to overcome.”

Seeing the mentorship program’s success, Robinson, Beanlands and Venance published a paper in the Canadian Medical Education Journal demonstrating the impact of the program on both the mentors and mentees, and hoped that it would also act as a roadmap for other medical schools who were interested in setting up similar programs.

“We wanted to not only show that the program had really positive impact, but also share knowledge and experience for other medical schools to be able to implement the program as well,” said Beanlands.

One of their goals with the program was to make sure that it was sustainable, and wasn’t going to end once they graduated from Schulich Medicine. They recruited some of their fellow students to carry on the torch and developed succession plans to keep the program moving forward.

Venance recruited Dr. Aldo Espinosa, an Assistant Professor in Anesthesia & Perioperative Medicine, as the new faculty point person, whose support and enthusiasm for the Program is keeping it thriving.

“It’s always important for a community that is considered a minority to have the space to feel safe. They also want to be understood deeply, and be acknowledged as part of the community,” he said.

Growing up and completing medical school training in Mexico, Espinosa says it wasn’t always the case for him and he spent a lot of time hiding his true self in order to feel accepted. “When I came to Canada, there was an openness and respect that was different from what I was used to. It’s amazing to see that the students are interested in knowing my experiences, and how that encourages them. It gives them calm and hope knowing that it’s going to be okay.”