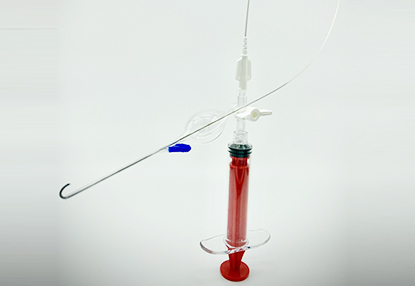 After a traumatic injury from an event such as a car crash or industrial accident, many patients die from blood loss before even entering the operating room. If health-care providers can keep the blood that wasn’t lost through the injury flowing to the heart and the brain, the chances of survival are dramatically increased.

This was the aim of Dr. Adam Power, a vascular surgeon who regularly confronts these types of injuries on the operating room table, and biomedical engineer and Western alumna Asha Parekh, PhD'15. The team developed a small device that could be quickly inserted into an injured person's femoral artery to keep blood pumping to these vital organs.

“This partnership between medicine and engineering that brings the clinical and technical sides together was what made this medical innovation possible,” said Parekh, co-founder of Front Line Medical Technologies.

Called the COBRA-OS (Control of Bleeding, Resuscitation, Arterial Occlusion System), the device is like a tiny balloon, less than two millimetres wide, that can be inserted into the artery and then inflated with saline solution to block blood flow.

Most adults have about five litres of blood in their body, and if they lose two litres the remaining blood may not be enough to keep the brain and heart alive, said Dr. Power, associate professor in the Department of Surgery.

“But if we use this device to short-circuit the system, and turn off the tap to the lower half of the body, we can keep the remaining blood circulating to the brain and heart and can keep people alive as a bridge to giving them blood and going into surgery to stop the bleeding."

While the device is brand new, the idea isn’t. Similar devices that use this same technique called REBOA (Resuscitative Endovascular Balloon Occlusion of the Aorta) have been used in some emergency situations, and extensively by the military to treat the wounded on the battlefield. However, the application of REBOA has been limited because previous devices are larger, so could cause damage to the arteries, and are cumbersome and time-consuming to insert.

“We saw REBOA as a potentially impactful life-saving technique that could help trauma patients, but we knew that the gap in the technology was part of the reason why it wasn’t being used more, so we set out to create a device that was simpler, faster and safer,” said Dr. Power.

The COBRA-OS is less than half the size of REBOA devices that have been used in the past. Through their research, the team was able to show that it takes just over a minute to insert, about one-tenth of the time it takes to insert the larger devices.

“When it comes to blood loss, timing really is crucial,” said Parekh.

Now that the device has Health Canada approval, the goal is to get the device out and in use in hospitals across Canada, with the hope it may eventually be used in pre-hospital settings as well. In future, paramedics may be trained to insert the device right at the scene of an accident, giving the patient the best chance of survival, Parekh said.

The team is also testing the device’s usefulness for other traumas, including postpartum hemorrhage and cardiac arrest.