“Some people walk in the rain, and others just get wet.”

For Shreya Gandhi, this quote best describes what it means to be a citizen.

“I want to hear stories, see perspectives, understand the emotions of others, and make a difference. I want to feel the rain,” she said.

When Gandhi was four years old, her mother was diagnosed with subependymoma – a rare benign ependymal brain tumour. The loneliness of crying herself to sleep each night as her mother lay in a hospital bed, remains with her today. It has also served as an inspiration for her journey to become the citizen she aspires to be.

It was on a fairly typical morning, while driving with her father, that Gandhi took her first step toward becoming that that citizen and ultimately a change-maker. As the radio played in the background, a public service announcement about the Brain Tumour Foundation’s annual Awareness Walk caught the young teen’s interest.

“My grandfather always told me that no matter where life takes you, you must dedicate at least one day each year to charity; that is what it means to live an impactful life” she said. “I wanted to do something that would honour my mother, and make my late grandfather proud. So I called the contact number they announced.”

Gandhi remembers speaking with personnel at the Brain Tumour Foundation to sign up for the Walk, and finishing the call distressed about the alarming statistics regarding brain tumour incidences that were shared with her. Brain tumours and brain cancer were now the leading cause of death among youth.

Gandhi teamed up with her best friend, Visale Balarajah, to get involved with the Walk, setting out to encourage more youth participation. Working with the Walk’s leadership team, the teens were successful in incorporating youth-friendly activities to the event, including dance performances, a kids’ zone, sweet treats for participants, and more than 110 student volunteers that cheered on the runners around the track.

More motivated than ever to make a difference, Gandhi and Balarajah founded Project X – Never Alone. In the early days of the organization, the duo focused mainly on raising awareness, education and support, initially dedicating their time to co-coordinating the Foundation’s Awareness Walks.

The domino effect of their initial intent was remarkable.

With funding through #RisingYouth, the duo was able to create mental health coping kits for families of pediatric brain tumour inpatients. Delivering the coping kits directly to families in hospitals in the Greater Toronto Area, Ronald McDonald House, and Knight’s Table Homeless Shelter, reinforced for Gandhi and Balarajah the differences that their efforts were making.

“During one of our deliveries to Brampton Civic Hospital, a family had just been in a car accident and were transferred to the trauma ward; the Hospital staff allowed us to come in and dress the two young girls as princesses, providing them with teddy bears, colouring books, and coping kits. Their grandmother thanked us with tears streaming down her face, telling us we were angels,” she said.

Each planned step that Gandhi took was met with an unexpected recognition and opportunity.

In 2018, Gandhi was recognized for her voluntarism with an Ontario Lieutenant Governor’s Community Volunteer Award. Presented to an Ontario student, it recognizes an individual who demonstrates exemplary commitment to the community and goes above and beyond to have meaningful impact on those around them.

During the summer of 2020, Gandhi became a member of the Ontario Provincial Youth Cabinet, representing the Brampton East Riding. Currently, she is proposing a policy paper for Minister of Health and Minister of Education to recognize brain tumour survivors and trauma patients as qualifiers for individual education plans. 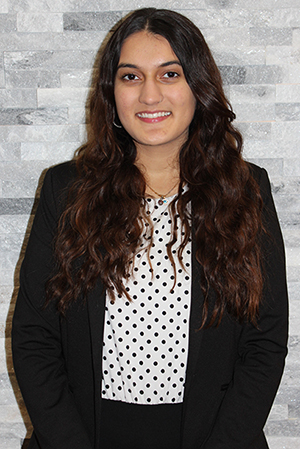 “This has been one of my most rewarding experiences to date,” said Gandhi. “Knowing that I can apply my knowledge and experiences and help facilitate policy change at a provincial level that will make the lives of people living with brain tumours better.”

As much as her mother’s brain tumour propelled Gandhi to support community fundraising and education efforts, it also stimulated an interest in science and specifically neuroscience.

“I fell in love with science and the brain because it took away the pain associated with the memories and provided a practical perspective to my mom’s tumour; I could not imagine studying anything else for the rest of my life,” she said.

Gandhi had Western’s Bachelor of Sciences – Neuroscience program in her sights early on, knowing that it was one of the only schools that offered a specialization in neuroscience at the undergraduate level.

“I’m loving the program and am involved in all aspects of neuroscience at Western,” Gandhi, who is in her third year, said. “I’m so privileged to be the current Co-President of the Western Undergraduate Neuroscience Society.”

Captivated by the possibilities the field offers, Gandhi is stretching her research skills as a volunteer research assistant with Jody Culham, PhD, at the University’s Brain and Mind Institute. She was recently offered an internship to work with neurosurgeon, Dr. Michael Cusimano for the summer of 2021.

With her research partner Maisha Fahmida, Gandhi placed third in a national brain tumour research competition; that is, the Pam and Rolando Del Maestro Family Undergraduate Student Research Competition, which challenges students across the country to propose a therapeutic intervention for an inoperable diffuse midline glioma.

In addition to her studies and her firm focus on Project X – Never Alone, Gandhi is also involved with Create Change Canada to help young girls in Ghana go to school, Uplift Ontario as a government policy council member and serves as a Youth Ambassador with the Brain Tumour Foundation of Canada.

Gandhi hopes to pursue neurosurgery in the future, hoping to make a difference in the lives of people who, like her mother, are brain tumour survivors. And along the way, she hopes to inspire others to not be afraid when a storm hits.

Early on in her volunteer work, Gandhi wondered if she should really try to tackle something as large and complex as brain tumour awareness. She was reminded of the impact that Project X – Never Alone had, and recognized she was on the right path.

“I was reminded that people are always watching, and it’s up to us to make the initial jump that will lead to an eventual ripple effect. So that’s what I will continue to do.”