Since assuming the role of Medical Director in late 2020, he has worked toward upgrading the Level 2C classified NICU to Level 3 status. To help achieve this goal, Augustine has recruited two new neonatologists to the region.

He also aims to procure specialized equipment and technology to facilitate the care of more complex critical cases such as neonates who are less than 26 weeks of gestational age. Currently, these patients must be transferred to a larger centre such as London and Detroit for care, posing a particular challenge for mothers in active or imminent labour with premature babies. 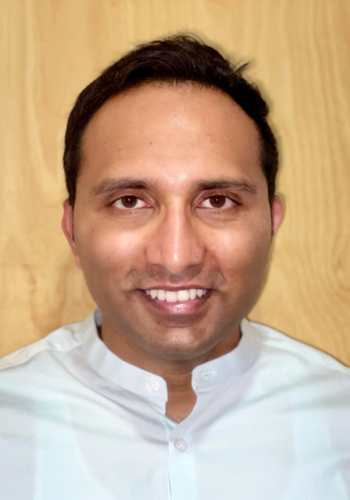 “I want to develop a high reliability NICU that provides high-quality, safe and efficient family-centered neonatal care. In the near future, we will be able to keep those babies here, because we have the necessary expertise and equipment to provide care to these critically unwell babies.”

Augustine has been a practicing neonatologist for 12 years, spending the last two at Schulich Medicine & Dentistry – Windsor Campus. After completing his medical education and residency in India, he spent time practising in Australia before moving to Ottawa to pursue fellowships in neonatology and targeted neonatal echocardiography.

“I was drawn to neonatal intensive care because witnessing the survival of babies on the cusp of viability, the joy that brings to the parents and their family when that baby is ready to go home, it’s incredibly rewarding. And the care we can provide is a testament to the advancements medicine has made, even in the 10 years since I’ve started practising.”

Although neonatal medicine in Australia and India differed in infrastructure, the system of care was similar. Augustine says that in moving to Canada, he recognized a noticeable shift in the role of a NICU physician.

“In the Canadian practice of neonatal medicine, physicians assume more of a managerial role within the unit. We oversee the care from multiple other health care providers: respiratory therapists, dietitians, pharmacists, while in Australia you might not be working with so many different health care professionals, you are the one performing some of these roles,” he said, adding that practising at the Windsor Campus has allowed him to dedicate more time to research and teaching.

After receiving positive feedback on his teaching during his fellowship, Augustine says he was eager for opportunities to get involved in medical education when he joined the School.

Currently, he is involved in seminar, small group and bedside teaching of first- and second-year students, as well as third- and fourth-year students on a selective rotation in the Paediatric Unit. He also teaches Paediatric residents on rotation from the London campus, and virtually supports teaching activities at the London Health Sciences Centre’s NICU a few times a week.

Taking a Socratic approach to his teaching, Augustine says he aims to create ‘productive silence,’ by asking learners intentionally probing questions and providing space for them to explore the answers.

“I see my role in the classroom as not being the ‘sage on the stage’ or the ‘guide on the side’, but to engage students in a shared dialogue, so that they create those meaningful connections between new material and their pre-existing knowledge."

Augustine’s research expertise lies primarily in systematic reviews and meta-analysis of stem cell therapies in chronic lung disease of prematurity and quality improvement projects in NICU. As a research supervisor of several students this year, he has had the opportunity to work on and support student research in a number of related areas, such as antibiotic stewardship in the NICU and measuring the impact of regional NICU patient transfers.

“These students are very enthusiastic, very keen, and highly organized in their goal setting and timelines,” he shared.

In the two years since joining the Windsor Campus faculty, Augustine says he has thoroughly enjoyed the experience of working in smaller centre, and is excited for the future of the campus and hospital.

“Everyone is friendly and collaborative, everyone knows everyone else. I certainly feel that my work does not go unrecognized, and I’m lucky to be part of this roadmap to a highly modern acute care hospital.”