Celebrating the BMSc Class of 2021 with Matthew Shammas-Toma

Matthew Shammas-Toma says his undergraduate journey first began in a dementia patient clinic in Toronto, where he volunteered as a high school student.

Realizing first-hand the impact that Alzheimer’s and other dementia disorders had on patients, Shammas-Toma became interested in studying neurodegenerative disease and finding ways to help patients through research.

It was the diverse selection of specializations, and the chance to explore them, that initially excited him about enrolling in the Bachelor of Medical Sciences program at Schulich Medicine & Dentistry.

Shammas-Toma was encouraged to pursue a specialization in Biochemistry and Cell Biology during his participation in research projects. And in his final year, he completed an independent thesis research project under the supervision of Martin Duennwald, PhD, investigating amyotrophic lateral sclerosis (ALS).

Through his project he got a taste of the challenges that accompany health research, while also gaining important experiences.

“We encountered many hurdles throughout, so I had to analyze what was wrong and make the appropriate adjustments. I set the grounds for developing a quantitative method to look at spinal cord pathology, and this approach is now being used by the lab to investigate other proteins involved in ALS,” he explained.

“I learned that you don’t always get the results that you expect. It takes persistence to interpret those results and resilience to troubleshoot and adapt.”

Inspired by his thesis work, Shammas-Toma will be starting clinical research work with Dr. Anthony Nichols, Associate Professor of Otolaryngology – Head and Neck Surgery, after graduation. He hopes to eventually pursue a career as a clinician-scientist. 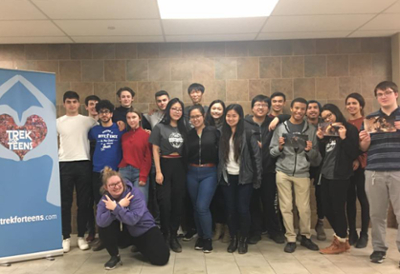 While it was the opportunities within the BMSc program that first drew Shammas-Toma to Western, it was the diversity of experiences he sought out and created for himself outside of the classroom that have made his time on campus truly transformational.

Along with some friends, he established a Trek for Teens chapter at Western to bring awareness to the issue and fundraise for Youth Opportunities Unlimited (YOU), a local youth support organization.

“My favourite memory at Western was the first Trek for Teens donation drive. We started this as a group of friends in first year, just trying to hold fundraisers. When we ran that drive, we raised $1,000, which was encouraging, and we immediately started thinking of ways we could expand.”

He had been initially introduced to the Trek for Teens Foundation after attending a presentation on youth homelessness, which opened his eyes to the need for resources and support for homeless youth on a community level

During his four years with Trek for Teens, Shammas-Toma was able to get the club ratified by the University Students’ Council, and held various donation drives that collectively raised more than $30,000 in in-kind donations for YOU, including clothing, non-perishable food, furniture and appliances. 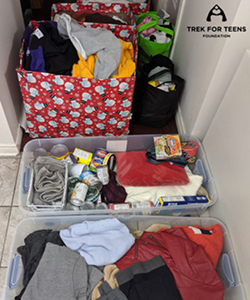 His interest in neurodegenerative disease research also led him to become involved in SciNapse Undergraduate Science Case Competitions, wherein teams of students propose novel solutions to a themed health problem. His team’s proposal for a new Alzeheimer’s drug landed them in the top 10 per cent of the competition, along with an invitation to present their research at the national competition at the University of Ottawa.

“I’ve developed and matured a lot at Western because of the variety of experiences I’ve had and thanks to the brilliant people I’ve met, who motivated me to persist and continue to improve myself,” he said. “I’ll forever cherish my time here.”