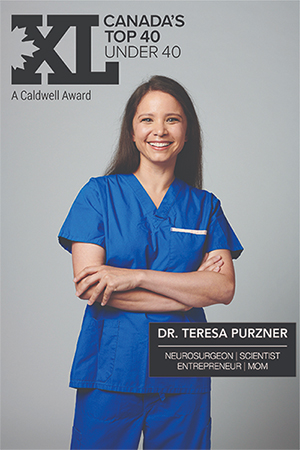 Dr. Teresa Purzner, MD’09, was named as one of Canada’s Top 40 Under 40 for 2021, celebrating her achievements in research, neurosurgery and entrepreneurship.

She is also a neurosurgeon at Kingston Health Sciences Centre and an assistant professor in the Department of Surgery at Queen's School of Medicine, Queen’s University.

During her time as a PhD student at Stanford University, Purzner discovered a new drug target to treat medulloblastoma, a common paediatric brain tumour, earning her national and international recognition. Her discovery led to the launch of a collaborative clinical trial, and has since been adapted into a therapeutic treatment for brain and skin cancer.

In 2017, she co-founded Cerebelly, a brand of organic, nutritionally dense baby food designed to promote optimal early brain development. Cerebelly is the first shelf-safe baby food to receive the Project Purity Award, and is available in more than 7,000 stores in the United States.