Schulich Medicine & Dentistry’s Dr. Vladimir Hachinski was recently honoured at the T.S. Srinivasan Knowledge Conclave in India in recognition of his contributions to neuroscience research.

Earlier this month, a representative from the Knowledge Conclave presented him with a gold medal and silk scroll in person at Robarts Research Institute.

The T.S. Srinivasan Knowledge Conclave is a major event in India that identifies and honours leaders around the world in the field of neuroscience. This year’s theme was “Frontiers of Brain Ageing and Dementia.”

Hachinski is a Distinguished University Professor of Neurology and scientist at Robarts. He is recognized as a leader in neuroscience research and his pioneering work has changed the way the world understands stroke and dementia. 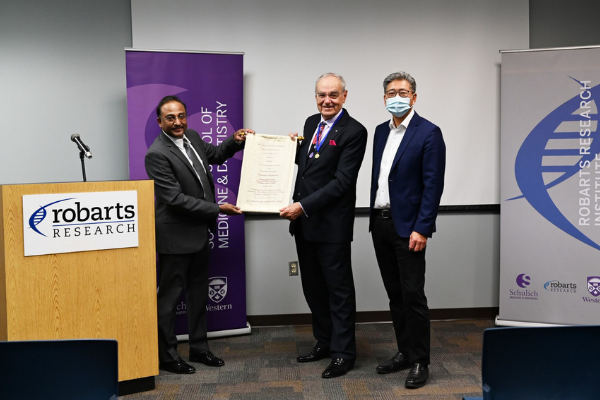