He’s played football in front of thousands, but Mark Mackie, Medicine Class of 2024, says his experience portraying Dr. Beary Goode is more in step with his future medical career. 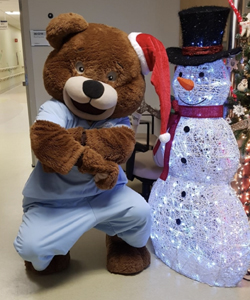 “The kids get so excited to meet Dr. Beary Goode, and it’s a ton of fun to see their reactions,” said Mackie.

A former CFL player, Mackie retired from the league in May to pursue medical school.

Raised in London, he started playing football as a Grade 9 student at Saunders Secondary School. A self-described “late bloomer” in taking up the sport, he quickly excelled.

Mackie attended McMaster University to study kinesiology and played football for five years as a Marauder. He was part of the maroon and grey squad that won the coveted Yate’s Cup in 2014.

“It was a dream come true to play football professionally,” he said. “I’m so grateful for the experience and to everyone who supported me along the way.”

Mackie’s sights were set on medicine before the big leagues came knocking. “As a high school athlete, I was a regular at Western’s Fowler Kennedy Sports Medicine Clinic,” he said. “Getting to know the sports medicine doctors and physiotherapists there, I developed a keen interest in kinesiology and health care.”

During his final year of undergraduate studies at McMaster, Mackie also worked in the Integrative Neuromuscular Biology Laboratory. There, he gained experience in biomedical research and gained new mentors who helped guide his academic pursuits.

The 25-year-old says choosing Schulich Medicine for his medical education was an easy decision. “I had a few football friends and connections already attending medical school here, so I felt completely at home; there was already a strong family feeling,” he explained.

So how does medical school compare to the football field? Mackie says he continues to draw on many of the skills he developed as a professional athlete.

“During my admissions interviews, it was hard not to share a football example for everything,” he said with a laugh. “There’s teamwork, leadership, collaboration, communication - medicine encompasses many of the same professional skills. There’s also a big mental component to the game, and I learned how to be resilient in the face of challenges or obstacles.”

During his time in Edmonton, Mackie also contributed to the team’s community efforts, working with children’s hospitals and programs in the city. His involvement with the Dr. Beary Goode mascot program is an extension of that work.

And Dr. Goode hasn’t been Mackie’s only acting gig. He also appeared in commercial spots for belairdirect last year, showing off his victory dance moves and identifying which Hollywood actor would play him in a movie.

During the CFL’s off-seasons, Mackie returned to London to lead a football lineman camp for local players with fellow Edmonton teammate Jacob Ruby. “It’s a great experience being a role model for these young players, to show them that passion and hard work really do pay off.”

A few weeks into his medical school experience, Mackie is feeling grateful and optimistic.

“There was a lot of uncertainty going into the program, with the pandemic and with my own hiatus from school,” he said. “The faculty and administrative team have done an exceptional job with the online learning and making us feel welcome. I’m excited to get to know my classmates better, and to learn more about their diverse backgrounds and perspectives. It’s just been awesome so far.”