From his hospital bed, Steven Gameiro, PhD’20, made the decision to completely pivot the focus of his doctoral research.

It was a risky, but necessary move for the young scientist. He was used to working in a wet lab setting, exploring cancers caused by the human papillomavirus (HPV). Instead, he knew if he wanted to continue his work, he needed to find a research project that didn’t require him to be physically present, so he turned to computational methods and big data. 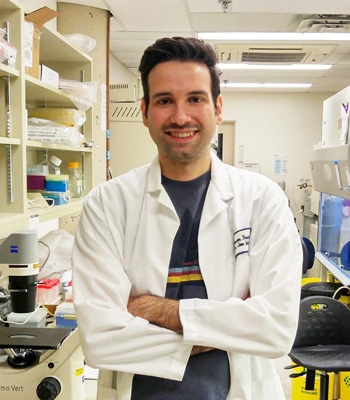 “At that point, I had no publications to my name, and I didn’t see an end in sight,” he said.

Gameiro has a genetic mutation that causes vascular weakness. Doctors discovered aortic aneurysms when he was 22 years old.

As a result, he withdrew from his undergraduate studies at Western for one year, undergoing more than 40 hours of surgery and 100 blood transfusions. “I was supposed to be at my healthiest and strongest, but instead I was fighting for my life,” he said.

In graduate school, he was forced to withdraw from his studies once again. After recovering from a planned 10-hour aortic surgery, a follow-up to his earlier surgeries, his appendix burst only a month after returning to the research lab. Because of his medical history, this setback meant a five-hour open surgery and longer recovery period.

The setbacks only continued. Gameiro was subsequently re-hospitalized several times with paralytic ileus. “I was getting discharged and hospitalized on and off for about three months,” he explained. “It was incredibly frustrating to be spending so much time away from my studies.”

For Gameiro, this three-month period was a turning point. Inspired by his graduate supervisor, Joe Mymryk, PhD, he embraced an entirely new research direction with only two years remaining in his PhD studies.

He says research helped him through the dark days. “Throughout all of this, research became my safe haven,” he said. “I could get lost in my work and forget about this overwhelming mountain of issues. It really saved me mentally.”

Born and raised in Hamilton, Gameiro is the first in his family to attend university. His parents emigrated from Portugal in the late 1980s.

His father passed away at a young age, when Gameiro was only 18 months old - the victim of a ruptured aortic aneurysm likely caused by the same genetic mutation. Gameiro believes his grandfather may have also succumbed to the familial gene.

Gameiro completed a Bachelor of Science degree at Western in 2013, with a double major in biology and medical sciences. During his undergraduate studies, he worked in a research lab at the London Regional Cancer Program (LRCP), which inspired him to pursue graduate school.

“In the lab environment, I made connections with like-minded people who equally loved science,” he said. “We were able to talk and share ideas freely.”

Gameiro joined the Mymryk Lab as a master’s student and transferred to the PhD program. His final research project focused on head and neck cancers – characterizing HPV-positive cancers and cancers caused by excessive drinking or smoking (known as HPV-negative cancers).

Collaborating with oncologists at LRCP, he analyzed tumour cells using computational and immunogenomic techniques. His thesis, titled “The Epigenetic and Immune Landscapes of HPV+ Tumor Microenvironments,” showed significant differences between HPV-positive and HPV-negative cancers at the molecular and immunological level.

“In the clinic, these cancers get the same treatment, but because of the epigenetic and immunological differences, they don’t respond the same way,” he explained. “This could potentially impact how treatment decisions are made in the future.” 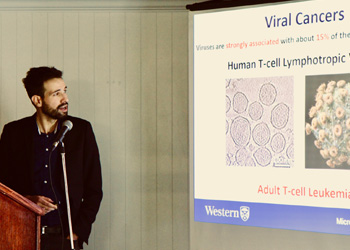 From his time in hospital to graduation, Gameiro excelled professionally. He published 14 peer-review articles and is the first or co-first author on seven of them. This year, he received the Department of Microbiology and Immunology’s Poland Award, recognizing the Department’s top graduating PhD student – having achieved a thesis defense score of 94.7 per cent across all examiners.

“It was Joe’s genius to pivot to this new research approach, and I ran with it,” he said. “It’s been a difficult road, but I’m so grateful I was given the opportunity.”

The 32-year-old is now completing a postdoctoral fellowship at McMaster University, focusing on cancer immunotherapy. He is also involved in a larger COVID-19 vaccine project at McMaster, applying immunotherapy technology to enhance and modify the body’s immune response to the virus.

Gameiro says he’ll never forget the support he received from faculty and staff at the School during his health struggles. “I never had to worry about my position as a trainee,” he said. “It showed me the human side of science and academia - that I was truly valued as a student, not just for my productivity or academic success.”