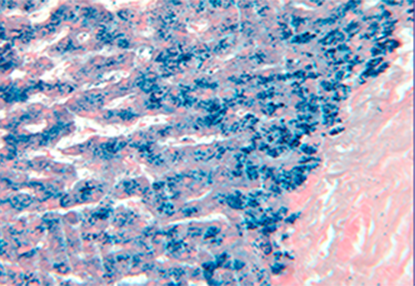 Men who have haemochromatosis, one of the most common genetic disorders in North America, are ten times more likely to develop liver cancer, according to a new study.

Led by a team  at the University of Exeter in collaboration with Dr. Paul Adams from Western University, the research has led to renewed calls for routine early testing for the condition which causes iron overload, previously thought to be a lower-level health risk. The findings are published today in the journal JAMA.

The new study projects that more than seven per cent of men with two copies of the faulty haemochromatosis genes would develop liver cancer by age 75, compared to just 0.6 per cent in the general population. Hemochromatosis causes the body to absorb too much iron from the diet and affects one in 327 Canadians.

Reliable tests are available to identify those at risk – blood tests for measuring iron levels (serum ferritin, transferrin saturation) and genetic testing (HFE C282Y genetic blood test). Symptoms can include feeling tired all the time as well as muscle weakness and joint pains. The researchers say it can often be misdiagnosed as the signs of aging. Most of those with liver cancer develop liver damage first, often progressing to cirrhosis of the liver. Once diagnosed, the condition is easily treated by a process similar to donating blood several times a year in order to lower iron levels.

The team analysed data from 2,890 men and women with two copies of the faulty gene (called HFE C282Y homozygous), from the UK Biobank, a large database of more than half a million British men and women recruited between 2006 and 2010 from across England, Scotland and Wales. People were aged 40 to 70 at the start of the study and were followed for a nine-year period. Twenty-one of the 1,294 men with the faulty genes studied have developed liver cancer so far, of whom 14 died due to their liver cancer. Ten of these 21 men were not diagnosed with haemochromatosis by the time they had a liver cancer diagnosis.

"The UK Biobank project is a glimpse into the future of medicine where all known genes are tested and then treatable conditions are offered treatment before serious complications develop,” said Dr. Adams, professor at Western’s Schulich School of Medicine & Dentistry and associate scientist at Lawson Health Research Institute, who has been studying haemochromatosis in Canada for more than four decades. “An early diagnosis of hemochromatosis can be treated by regular blood donation in Canada."

Haemochromatosis is more serious in men, with women partially protected because they lose iron through menstruation and childbirth, although some younger women do develop the disease. The study found no increase in liver cancer risk in women with faulty haemochromatosis genes.

“Tragically, men with the haemochromatosis faulty genes have been dying of liver cancer for many years, but this was thought to be rare. The UK Biobank study allowed us to measure the cancer risk accurately. Finding that over seven per cent of men with the faulty genes are likely to develop liver cancer by age 75 is shocking. Fortunately, most of these cancers could be prevented with early treatment,” said David Melzer, professor at the University of Exeter Medical School, who led the research team.