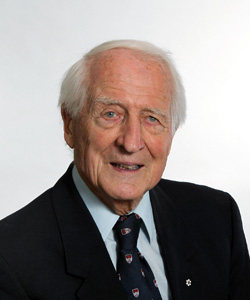 The Western community is mourning the death of medical education pioneer Dr. Douglas Bocking, MD’43, a former Dean of Medicine, who died May 9. He was 99.

“Over the past 16 months, I’ve had several opportunities for intense one-on-one conversations with Dr. Bocking. I cherish those,” Western President Alan Shepard said. “He was a wise counsellor about institutions and people and the important work we do at the university. It was my great honour to have had the opportunity to get his advice and share in a small way in his extraordinary life of service.”

Beginning in 1938, Dr. Bocking saw his Western medical education accelerated by the Second World War. After graduation in August 1943, he joined many of his generation of medical professionals in enlisting in the Royal Canadian Army Medical Corps and then Royal Canadian Navy Volunteer Reserves, where he served for a year and a half.

In 1952, Dr. Bocking returned to London and opened a consulting practice in internal medicine and rheumatology. He also accepted an academic position in the Faculty of Medicine at Western.

Since those early days, Dr. Bocking helped usher in a new era of medical education.

Dr. Bocking oversaw the implementation of new programs in medicine, including physical and occupational therapy, speech pathology and audiology. He also led the creation of the country’s first academic department in family medicine, helping to establish Canada as a leader in the field.

“Dr. Bocking was a remarkable man – a true gentleman and a renowned scholar. He had an amazing intellect, compassion, and a curiosity that was evident to all who knew him.” said Dr. John Yoo, Schulich School of Medicine & Dentistry Dean. “Much of the foundation upon which our faculty was built can be credited to his vision for the profession and medical education.”

Dr. Bocking also oversaw the affiliation of University Hospital with Western in 1970, a move that elevated the university and London stature globally.

“Dean Bocking was a great scholar, mentor and champion support to the school and university,” said Dr. Davy Cheng, who served as Acting Dean at Schulich until earlier this year. “I was very fortunate to have several interactions with Dean Bocking in the past few years. He was a sharp-minded, brilliant and humble giant who always had our school and university at heart.”

Outside the University Gates, he was also instrumental in the founding of the Westminster Institute for Ethics and Human Values and the London InterCommunity Health Centre.

An avid outdoorsman, especially as a birder and canoeist, he was instrumental in having the Thames River declared a Canadian Heritage River by the Governments of Ontario and Canada in 2000. He ran with Terry Fox as he passed through London in 1980. He was a long-time member of the Harvey Club.

Dr. Bocking remained an active member of the London and university communities until his death.

Today, his innovative character is immortalized by the Douglas Bocking Award, presented annually as one of Schulich Medicine & Dentistry’s most prestigious teaching honours.

In 1999, the Government of Canada formally recognized his commitment to health care and community service by appointing him to the Order of Canada.

A celebration of life will be held at a later date.