It is with sadness that we share the news of the passing of Dr. Howard (Howie) Spencer Cameron, MD’50, on Wednesday, September 4, 2019 in his 99th year.

Dr. Cameron was a member of the Medicine Class of 1950, a unique class of medical students who each served in World War II and came to be known as ‘the Veterans Class.’

At only 18 years of age, and fresh out of high school, Dr. Cameron joined the army. After training locally, he travelled to England in 1940. There he became and Lieutenant and crossed the channel to France to serve with his unit across Europe.

After the war was over, Dr. Cameron returned to Canada taking advantage of the Veteran’s Rehabilitation Act, which paid university tuition for veterans and was accepted into the medicine program at Western University. He completed residency and fellowships in orthopedic surgery in Ottawa, London and Boston, and was an orthopaedic surgeon at St. Joseph's Health Care London and faculty in the Department of Surgery at Schulich Medicine for more than two decades before becoming a professor emeritus.

Dr. Cameron was proud to have served six years in the Royal Canadian Artillery and he returned to campus often with members of his to celebrate his Homecoming Reunion and acknowledge their lasting contributions to the School and the country.

Today, a plaque hangs in the lobby of the Medical Sciences Building, which acknowledges the dedication and commitment of the Medicine Class of 1950. 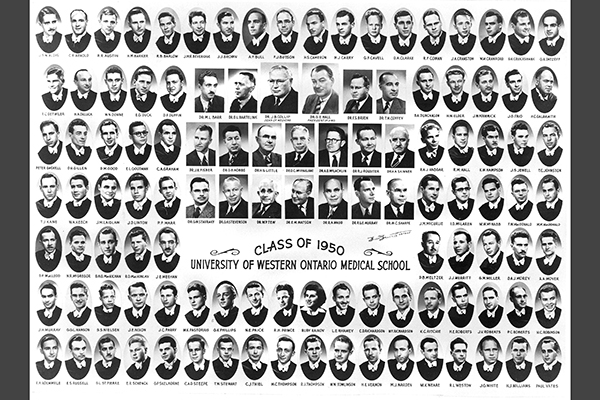