Ontario research shows that if you are a first-generation migrant, you are more likely to be involuntarily admitted to hospital after your first psychotic disorder diagnosis. Researchers at ICES, a non-profit research institute that uses population-based health information to produce knowledge on a broad range of health care issues, found African and Caribbean migrants are at the highest risk of involuntary admission.

The study, published today in Epidemiology and Psychiatric Sciences, is unique because the large data holdings at ICES allowed the researchers to study a large population-based sample, to include a wider range of ethnic minority groups, and to examine the effects of migrant class (immigrant vs. refugee).

“Our findings suggest inequities in the risk of involuntary admission after a first diagnosis of psychotic disorder among most ethnic minority groups, compared to the general population, with higher rates in African and Caribbean migrants. We also observed that refugees from some regions were particularly vulnerable, and refugees from the Caribbean had the highest risk of involuntary admission,” says Dr. Kelly Anderson, senior author on the study, adjunct scientist at ICES Western and assistant professor at the Schulich School of Medicine & Dentistry at Western University.

Psychosis refers to a loss of contact with reality. Hallucinations, delusions, and paranoia are some of the symptoms that can be associated with early psychotic disorder. 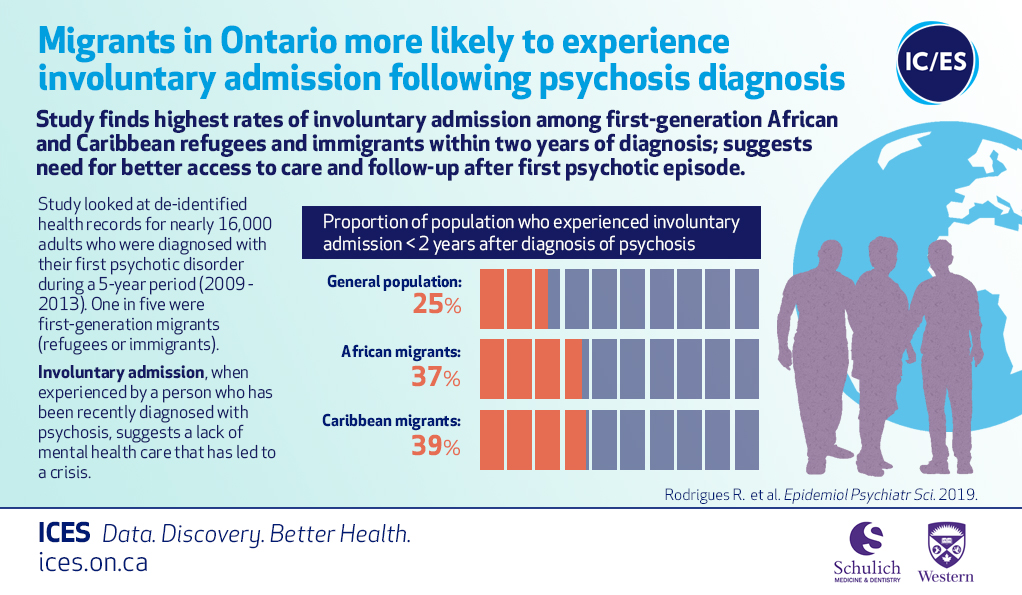 The researchers identified 15,844 people aged 16 to 35 years-old who were diagnosed with their first psychotic disorder during the five-year period from 2009 to 2013. First-generation migrants accounted for 19 per cent (3,049) of the study group. The researchers found that most first-generation ethnic minority groups had a higher risk of a first involuntary admission within two years of diagnosis compared to the general population. African and Caribbean groups were the most likely to experience an involuntary admission. Among people with early psychosis in the general population, 25 per cent experienced an involuntary first admission, compared to 37 per cent for African migrants and 39 per cent for Caribbean migrants.

“Previous research has shown us that there may be differences across ethnic groups in terms of symptoms and behaviours at first presentation and how they are perceived by service providers. But we don’t know whether there were differences in the severity of this or in the clinician’s perception. Alternatively, migrant groups may have greater difficulties navigating our health system, or may delay help seeking, and as a result are in a crisis state when they reach psychiatric services necessitating an involuntary admission,” says Rebecca Rodrigues, first author on the study and ICES student when the study was conducted.

The researchers add that their findings highlight the need for policy initiatives aimed at improving pathways to care in first-generation ethnic minority groups with early psychosis—particularly in Caribbean and African communities.