It is with sadness that we share news that Dr. Gerald (Gerry) Zanvil Wright – professor emeritus at Schulich Dentistry and a passionate local and international advocate of dental training in pediatric practice – has died.

He passed away at home surrounded by the love of his family on October 30, 2019 and is survived by his wife Nancy, his children Michael (Robyn), Charles (Jill), Jeffrey (Linh) and his six grandchildren Simone, Maxine, Lexi, Josh, Theo and Lily. 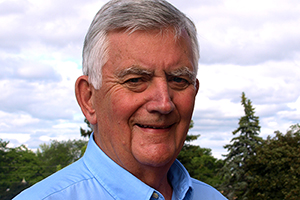 Born in the north end of Winnipeg, Wright and his family moved to London 50 years ago after he completed graduate school. As a DDS, MSD, FRCD (C), Dip. American Board of Pediatric Dentistry, he was an internationally respected clinician, writer and Professor Emeritus at Western University. He was a member of the Department of Pediatric Dentistry and became the Chair of the Division of Orthodontics and Pediatric Dentistry.

His innovations led to the creation of several programs, including being founder and director of Operation Belarus, a project to improve dentistry in Belarus.

With colleagues at the Schulich School of Medicine & Dentistry, he also developed the Mustang Dental Conference and at the end of his academic career he was responsible for creating the Qualifying Program (later known as the International Program) for landed immigrants who were trained as dentists outside of Canada.  He edited/authored numerous scientific articles and five books, including writing the leading text on behaviour management of children in the dental office; the newly revised edition will be titled  Wright’s Behaviour Management in Dentistry for Children in his honour.

Dr. Wright was a Visiting Professor at the Hebrew University in Jerusalem, at Baylor College in Texas, at Sydney University in Australia, at Ulm University in Germany, and Trinity College in Ireland. For his work in Belarus, he received a Doctor Honoris Causa. In 2001, he was awarded the Medal of Paris for his work with children around the world. In Romania, he was referred to as the father of modern pediatric dentistry. In 2003, he received the A.J. Herman Fellowship from the University of Western Australia for enriching their understanding of how to help less fortunate countries improve the dental health of children.

In his retirement Dr. Wright was also busy in London, with Temple Israel, with his weekly hiking group, painting and with daily work outs at the Y. He also logged a lot of miles back and forth to Stratford.

Learn about funeral details and read the full obituary.