When Jessica Prodger, PhD, began researching HIV in Uganda in the mid-2000s, antiretroviral medication was only just being made widely available in the country.

“I saw the devastation that this virus had on sub-Saharan Africa, and I felt like that was what I wanted to work on for the rest of my life,” said Prodger, PhD, Assistant Professor, Schulich Medicine & Dentistry. “The aim is to find ways to prevent that from ever happening in the first place, and then find a cure for all those people so they don’t need lifelong treatment.”

That experience continues to inspire her research, as she works to discover new ways to prevent HIV transmission and seeks out an ever-elusive cure.


While Prodger acknowledges the medical community has come a long way in the prevention and treatment of HIV, she says the work isn't done yet.

“It’s important on World AIDS Day to remember that the fight is not over.” Jessica Prodger, PhD

“It’s important on World AIDS Day to remember that the fight is not over,” she said.

Commemorations like World AIDS Day offer a sobering reminder that 37.9 million people still live with HIV and that more than 32 million people have died since the epidemic began in the 1980s.

Although treatment is now available that allows HIV-positive individuals to live virtually normal lives and be non-infectious to their partners and family members, Prodger notes that they’ll still be forced to take medication every day for the rest of their lives and face stigma associated with their status.

And so the fight to better treat and, ultimately, cure HIV continues in her lab, and in many others at Schulich Medicine & Dentistry.

Prodger’s research focuses on populations affected by HIV in Africa. Her team investigates why certain individuals are more or less susceptible to HIV. As part of that research, she’s dialled in on an interesting observation that the penile microbiome – the polymicrobial community that lives on the surface of the penis – affects HIV susceptibility in heterosexual men.

“My research is focused on better understanding the interplay between the penile microbiome and the human tissues, and how the relationship between bacteria and human cells can influence a virus,” she explained.

By understanding which microbes are potentially pathogenic and contributing to HIV susceptibility, the goal is to design new ways to prevent HIV transmission that would significantly impact the HIV epidemic in sub-Saharan Africa.

Prodger was initially drawn to global health and HIV research while in graduate school in the early 2000s. She wanted to address the then 10/90 gap, where only 10 per cent of the world’s research dollars were being spent on issues affecting individuals in developing countries, where 90 per cent of deaths due to preventable diseases occurred.

Since then, she’s been committed to not only researching HIV prevention, but also investigating ways to potentially cure individuals living with the virus.

Prodger is part of an international collaborative effort working on HIV cure research. They’re studying what’s known as the latent HIV reservoir, where dormant cells can harbour HIV and hide in the body for decades. The team is comparing differences in the latent reservoirs between North American and Ugandan populations.

The fact that HIV can hide in parts of the body and actually integrate into the DNA of human cells is part of what makes finding a cure so difficult. 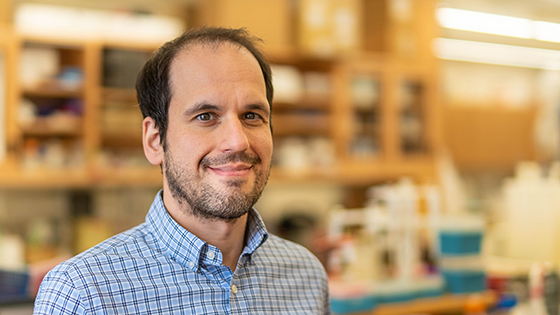 His research lab is studying the HIV-1 protein Nef and its role in compromising the immune system of an individual who is infected with HIV.

“We are interested in how certain viral proteins that are produced by HIV function inside immune cells and contribute to the pathogenesis of the virus,” Dikeakos said.

He’s hopeful his findings will allow for the development of small molecule inhibitors that improve the immune response during infection as a form of treatment for HIV.

Dikeakos says understanding these mechanisms and interactions will be essential to finding a cure, but acknowledged that solving one of modern medicine’s greatest puzzles will require studying HIV from many different perspectives – something that’s currently happening at Schulich Medicine & Dentistry.

“Finding a cure is a multifaceted approach that will require a cocktail of treatments,” he said. “Collaboration is key; having all of us working together because we all have different expertise.”

The power of collaboration in tackling HIV was demonstrated earlier this year, in studies by Schulich Medicine & Dentistry and Lawson Health Research Institute.

They found that HIV could be transmitted through additional drug-use equipment – often called cookers and washers – and not just from sharing needles.

Their studies also showed HIV transmission could be prevented by heating the injection equipment for 10 seconds with a lighter, which effectively kills the virus.


The work sparked the ‘Cook Your Wash’ public health campaign in London, a partnership with the Middlesex-London Health Unit and Regional HIV/AIDS Connection, which helped to reduce the local rates of new HIV cases.

“We hope our findings can be used to reduce the incidence of HIV transmissions even further and that one day, society will be HIV free,” Dr. Silverman said.

Although the focuses, expertise and approaches of the many HIV-research trailblazers at Schulich Medicine & Dentistry may differ, the scientists share a common goal and motivation: combatting one of the world’s most widespread epidemics from every front.

“We should always be striving to have some sort of vaccine for every type of infectious disease, that should be our mission. We can’t give up until there is one.” Jimmy Dikeakos, PhD.

“We should always be striving to have some sort of vaccine for every type of infectious disease, that should be our mission,” Dikeakos said. “We can’t give up until there is one.”

It’s a sentiment shared by Prodger, who put the push for continued HIV research simply: “We need to keep the fight going.”