Feature: Celebrating the BMSc Class of 2019 with Megan DeWeerd 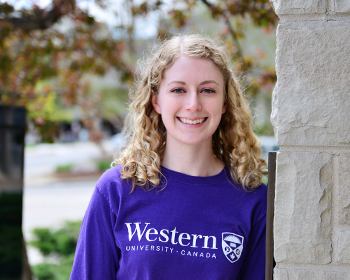 She lost a close family member to the disease as a teenager. “The experience inspired me to chase after my dreams, work hard and contribute toward finding a cure,” she said.

A high-achieving student in the Bachelor of Medical Sciences program, DeWeerd is part of the first cohort of students graduating this June with an Honors Specialization in Biochemistry and Cancer Biology.

The module focuses on the molecular mechanisms of cancer progression and how this knowledge is translated from the research lab to cancer patients. “It takes a very interdisciplinary approach, with a taste of so many different disciplines,” she said. “It was such a rewarding experience getting to learn from experts in each field from across the School.”

Born and raised in London, DeWeerd chose to study at Schulich Medicine & Dentistry because of its academic strength in the medical sciences.

During her time at the School, she also got involved in student leadership, serving as Co-President of the Western Biochemistry Club, a student-led group that organizes a variety of social and academic events throughout the year. One of the Club’s initiatives was a weekly dinner series called Proteins with Profs hosted at The Wave - an opportunity for students to connect with faculty members in an informal, relaxed setting.

DeWeerd also co-founded a mentorship program for students entering their second year in medical sciences. “Students are quite intimidated by the required courses in second year,” she explained. “There are often rumours spread about their difficulty, so I wanted to help the transition and ease that anxiety.”

The 22-year-old fell in love with research during a summer placement in a cancer biology lab at London Health Sciences Centre. “I was able to take the information I learned in class and apply it in the lab setting,” she said. “And the idea of learning something that no one else has learned before is really appealing to me.”

Researchers have shown that in ovarian cancer, a particular protein complex known as DREAM assembles during metastasis that allows cancer cells to evade chemotherapy and survive. DeWeerd’s project investigated whether or not this same protein complex is involved in breast cancer, which spreads differently than ovarian cancer.

Using the gene-editing tool CRISPR/Cas9 to knock out two genes involved in secondary cancer growth, she looked at how impairing the complex assembly affected metastasis with the goal of eventually improving patient outcomes.

With up to 14-hour days in the lab, she remained motivated by the methods, tools, and technology at her fingertips. “My mind is intrigued by solving problems,” she said. “It was a lot of work, but I really enjoyed the experience.”

In recognition of her academic achievement, DeWeerd is receiving the Western Gold Medal at Convocation, awarded to the student with the highest standing in the Honors Specialization in Biochemistry and Cancer Biology.

She says it is also important to stay grounded outside of academia and university life. “Setting aside time to spend with people I love is the secret to my success,” she said.

In September, DeWeerd is starting a master’s program in medical biophysics at the University of Toronto, with a focus on cancer research. With her sights set on a career in research, she hopes to transition to a PhD program within the next two years.

As she prepares to cross the Alumni Hall stage, she reflects with gratitude. “Western has given me a strong foundation to build on,” she said. “I’ll be forever grateful for the experiences I’ve had and the friendships I’ve built here.”

The Schulich School of Medicine & Dentistry congratulates Megan and the entire BMSc Class of 2019 for their achievements during the past four years and on their graduation.