It was a cool, crisp fall afternoon in London. The calm weather belied the anticipation that we felt for what lay ahead. After loading our transport van with sixteen bags of medical equipment (and a couple with our personal possessions!) we made our way to Pearson International Airport to begin our journey to Haiti.

Our team is small, only eight people including three surgeons, an anesthetist, two nurses, an equipment rep and team lead. With only a week in a hospital in Port-au-Prince, the London Spine Team’s goal is to help a small volume of patients in any way they can.

In a country that is fuelled by anger over inflation, dwindling supplies and expensive fuel, any help seems valuable. The statistics say that 60 per cent of the people in Haiti make less than $2 a day and 25 per cent make less than $1 a day, making it one of the poorest countries in the world.

We travelled to Haiti as part of Team Broken Earth (TBE) which was started by Dr. Andrew Furey from Memorial University in Newfoundland after the earthquake in 2010.  He has helped raise thousands of dollars and there are now a dozen teams from across the country that travel to Haiti for a week at a time to offer their expertise.  TBE has also expanded its efforts to Guatemala, Nicaragua and Bangladesh.

The mission of TBE is to work with medical communities, through volunteering their expertise and knowledge through medical and surgical assistance, education and mentorship with the aim of enabling the local medical staff to become self-sufficient and sustainable.

Landing in Port-au-Prince we were greeted by a wave of tropical heat and humidity. Our large hockey bags of medical and surgical supplies were loaded into the back of a van and the eight of us piled into the front and back of a converted Land Cruiser. As we rode through the streets toward the hospital, we got a glimpse of the living conditions, state of the economy and lifestyle of the Haitians. It was clear many did not have electricity or running water in their homes. In some areas of the city we saw barefoot children with beaming smiles running through the streets with goats, dogs and chickens not far behind.

There were vehicles and people everywhere, no lines on the roads and no signage. In fact, some of the roads were dirt paths riddled with pot holes, stones and debris. Wherever there was an opening in traffic, no matter how small, our driver took it.

This is the city we grew to know and care for and we became most fond of its people.

The Bernard Mevs Hospital is a small walled-in compound housed behind guarded gates. Christina Frangou from the Newfoundland team wrote a description of the hospital in 2017. “The one-time private home has been refurbished into an outpatient day surgery clinic before the earthquake in January 2010. In the months following, Project Medishare moved its tent hospital to Bernard Mevs, transforming it into the only trauma and critical care hospital in Haiti. The top floor of the new building has dormitory-styles suites for volunteers, with private bathrooms and a shared kitchen. Beds are available for up to 40 volunteers. This is key for a hospital that relies on volunteer healthcare workers for both patient care and staff education.”

The dormitory-style rooms consisted of two metal bunk-beds, a sink and a cupboard. The common area had a few large tables and chairs and a small but well-enough equipped kitchen.

As soon as our tour was over, we met our first surgical patient. He was lying on a bed but beaming with the one of the biggest smiles I have seen. He had a cervical spine fracture dislocation that occurred about 18 months prior while attempting a back-flip on the beach. He was suffering from chronic neck pain and at risk of a spinal cord injury. He was in his thirties and just wanted to be able to dance again. His surgery was planned for the next day.

We were so pleased when he walked out of the hospital a few days later, with an even bigger smile on his face.

The team’s day usually started around 7 a.m. and we were back in the kitchen making dinner around 6 p.m. every day. In the evenings, when Dr. Supriya Singh was not crushing us at card games, she would often make patient rounds.

There were a few patients with such severe spinal cord injuries that all the team could do was surgically repair the wounds or stabilize the spine.  It was heartbreaking to know these individuals had little or no family to offer support, no income to return for follow-up treatment and no means of transportation to return for help. The hospital does not provide meals for the patients so family members or friends wait outside in the heat, humidity or rain in order to feed their loved ones. There are no real waiting room facilities so many spend hours or days sitting on metal chairs and sleeping on the ground to be close to the patients and help care for them. Our team often made extra dinner in the evenings and took the leftovers to those waiting outside. 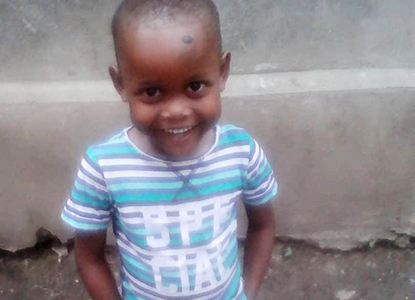 The happiest story that came out of our 2018 mission was treating a 5-year-old boy with tuberculosis. His lungs were a mess and the disease had eroded several of his lower thoracic and upper lumbar vertebra. When he was brought into the operating room he was so scared, and our team of nurses and surgeons were amazing at calming him and explaining what was going to happen.

Surgery was undertaken to stabilize his spine. A trunk body cast was fashioned with whatever casting material the team could scavenge to give extra support to the metal implants that were placed in his weakened bone. He was started on antibiotics for the tuberculosis.

His surgery was a resounding success.

Dr. Singh has been able to keep in contact with his aunt who texts us pictures and videos. He is dancing again.

The two nurses on our team, Helen Hughes and Shayna Lawrence, set up the OR room each morning and cleaned after each operation, monitored the equipment supply and assisted the hospital staff both pre- and post-op. It was evident their warm smiles and calm demeanor put the patients at ease and garnered the respect and confidence of the hospital nursing staff.

Brad l’Heureux, our Medtronics rep (Medtronics supplied the surgical equipment on loan) was at every operation to ensure the appropriate equipment was sterile, organized and functioning. We were so fortunate to have Dr. Mauricio Giraldo on our team as the anesthetist. He was so calm and thorough under pressure and he kept us laughing with his wonderful sense of humor. 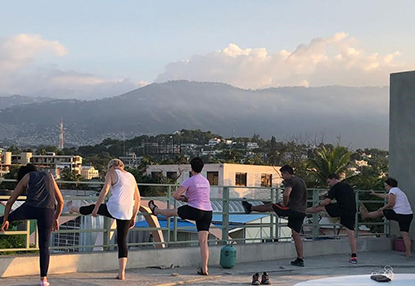 The sunsets in Port-au-Prince are quite amazing. The roof-top of the hospital was a quiet place to unwind, soak up the heat and the sunset, stretch, do some yoga or just gaze out over this incredible country. You could see kids and locals a stone’s throw away in their homes or walking the streets below. You could see the hillside dotted with huts, and avocado and mango trees and some high-rise buildings.

On the roof we realized that good things happen in small steps through persistent efforts by ordinary people.

The London Spine Team is planning to return to Port-au-Prince.  Our mission in October 2019 had to be postponed due to the current unrest in Haiti. The latest report from TBE states that, “…the news is not getting any better.  Upcoming missions have been postponed due to the volatile situation on the ground in Haiti. There have been more riots and subsequent loss of life. Schools have been closed as well as the general hospital, which has caused significant pressure at Bernard Mevs.”  Team London hopes to return the end of January 2020 but that will depend on how safe it is to travel.  In the meantime, our surgeons are in contact with the hospital in Haiti and are giving any advice and support they can from across the continent to the staff and prospective patients.  If we aren’t able to return to Haiti, we may find ourselves in one of the other countries with whom TBE has ties, but our hearts are with those in Haiti.