Feature Article: Celebrating the Medicine Class of 2017 with Yousif Atwan

For Yousif Atwan, there was no “aha” moment, and no epiphany. Rather, the decision to pursue medicine was somehow just there - a plan slowly coming together one piece at a time. And it developed as a result of a strong family foundation, a fascination with science and an unexpected academic mentor who opened the door to new opportunities for him.

A member of the Schulich Medicine Class of 2017, Atwan is graduating, having had the time of his life in medical school.

Born in Iraq, Atwan recalls being warmly welcomed to the Windsor community in 2002. Growing up with two younger siblings, sports and the importance of family factored prominently in his elementary and high school days. He credits his hard-working parents for creating a life that set him up for success.

“When I was younger, I noticed how much my parents struggled, what I wasn’t aware of at the time, is that they did everything for me. I realize now that I didn’t have a lot of control over what has gotten me to where I am today,” said Atwan.

Academically, Atwan excelled in the sciences. And he enjoyed working with people. But while medicine seemed a likely option for a career, it wasn’t until he met Professor Lana Lee, an adjunct professor with Schulich Medicine, that he began thinking more seriously about his future as a physician. 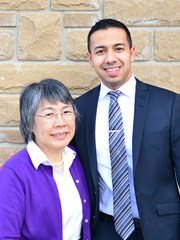 Lee first met the young Atwan while he was in high school. She was an advocate at his school, leading science demonstrations, and encouraging students to apply to science programs at the University of Windsor. Lee continued to mentor Atwan during his undergraduate studies, introducing him to medical students at the Windsor Campus and encouraging him to apply.

“A lot of my getting into medicine was because of Dr. Lee,” said Atwan.

Describing his four years in undergraduate medicine as a whirlwind, Atwan is not shy to share that there were tough times. For him, those times included finding the time to dedicate to family.

“Sometimes we get caught up with the world of medicine, and while we make time for friends, you have to make sure you set time for family. This took me a while to figure out,” he said thoughtfully.

He also wrestled with the whole notion that he actually was going to be a doctor. He often caught himself wondering if he could really do it. The curriculum, his classmates and his mentors, however, helped him to realize that the situations he was thrown into were providing him with the experiences and confidence to make connections and build trust with patients, and adapt along the way, while not always having the answers at his fingertips.

At the same time, Atwan reflects fondly on the four years of his training and the many opportunities it offered, including serving as Vice President of the Hippocratic Council and as a member of the Admissions, Accreditation and HUMEC committees, as well as the Co-Chair of the 2015 Canadian Federation of Medical Students Conference – a role of which he is most proud.

“Our School tried two times before to host the Conference, and we decided to try once more,” said Atwan.  “Being chosen to host in 2015 was a phenomenal achievement for everyone involved with the project; it was the first time it was ever held at a distributed site, and it brought a lot of attention to the Windsor Campus and the School overall; it was a real success,” he added.

With so much going on inside and outside the classroom, Atwan had to work to find the balance in his life – but his pragmatic personality held him in good stead. He’s comfortable in his own skin and knew what his limits were, when it came to time and energy.

“The many different things I have in my life, give me the balance I need,” he said. “There’s no question that I have my threshold and that finding the balance took some time, but I did find it.”

Atwan’s compassion for patient care is obvious, although there is a tougher than steel and very practical side to his personality which has helped him to achieve his goals.

“If there was to be a slogan for my life, it would be fail hard, try harder,” he said. “When I think about my life and attitude toward anything, I try to not be afraid of failure – fear just sets me back in terms of time and energy. Instead, I try to be positive about everything that comes my way – if I fail, then, I have to realize that it was part of the process and bounce back as much as I can to try and get the job done once more.”

In July, he’ll take this positive and can-do attitude with him into an orthopaedic surgery residency in London, continuing his journey with the School. He’ll do so with tremendous pride of being a Schulich Medicine alumnus.

“I’m proud to have been part of such an awesome family and school,” he said. “My classmates and I have worked so hard and I can’t thank them enough for being there with me. We’ll always be thankful that Schulich Medicine brought us together, and hopefully we can come back and give back to the School that gave us so much.”

The Schulich School of Medicine & Dentistry congratulates Yousif and the entire Medicine Class of 2017 on their incredible achievements during the past four years and on their graduation.