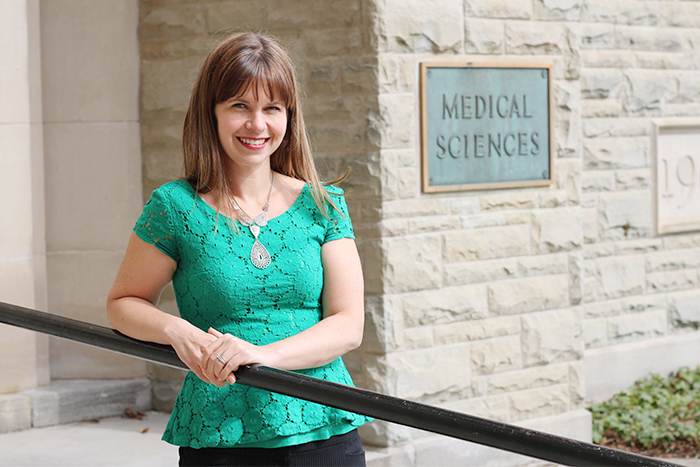 Eleven winners, representing five different faculties, have been awarded Western’s highest honours for inspiring active and deep learning in their students. This year’s winners join a company of teachers nearly a quarter century in the making.

Established in 1980-81, the University Awards for Excellence in Teaching were named in 1987 in honour of Edward Gustav Pleva, Western’s first Geography teacher in 1938 and head of the department from 1948-68.

Established in 1989-90, the Award for Excellence in Teaching by Part-Time Faculty was renamed in 2003 in honour of Angela Mary Armitt, BA’36, MA’67, LLD’87, a champion of life-long learning, and Western’s first dean of the faculty of Part-Time and Continuing Education.

Established in 1996-97, the Award for Excellence in Teaching was established to be awarded based on evidence of outstanding contributions in the area of classroom, laboratory or clinical instruction. The award was later named after Physiology professor and Educational Development Office coordinator Marilyn Robinson, who became captivated with the idea of exciting students by means of active learning and problem solving.

Although large classes can often be a challenging environment for both students and instructors, with limited interaction, Anita Woods’ use of technology in classrooms has begun to close this gap. Over the past five years, Woods conceived, developed and popularized the use of a three-dimensional augmented reality (AR) software for the study of human organs in higher education. The program allows students to view and directly manipulate organs in augmented reality to further their understanding of how the structure of organs affects function.

After garnering overwhelmingly positive feedback on campus, the program sparked Wood’s partnership with Pearson Solutions and distributed the models to institutions beyond Western. Her ongoing work with the project is now focused on refining the software so it can be used on Google’s Cardboard virtual reality viewer, a more cost-effective and accessible alternative.

Beyond her work with AR software, Woods has also developed a highly interactive library of online competency modules that expose students to a virtual lab that aims to help students develop essential skills for future careers in research.