In the early 1980s, when unusually high rates of pneumocystis jirovecii pneumonia (PJP) and Kaposi’s sarcoma began to present in populations of young gay men, physicians and public health officials were left wracking their brains for a correlation between the cases. The situation became even more confusing when it was later discovered that injection drug users and heterosexual women, too, were affected by this mysterious illness.

Today, we recognize these incidences as the earliest documented cases of HIV/AIDS, and have a greater understanding of what the virus does, how transmission occurs and the steps that can be taken to detect and manage the illness. Stigma and a lack of understanding about the virus, however, are still alive and well, and are fuelled by misinformation.

Infectious disease expert Dr. Michael Silverman, Chair of Infectious Diseases at Schulich Medicine & Dentistry, discusses the top five myths associated with HIV/AIDS that he has encountered in his practice as a physician, health care administrator and scientist. 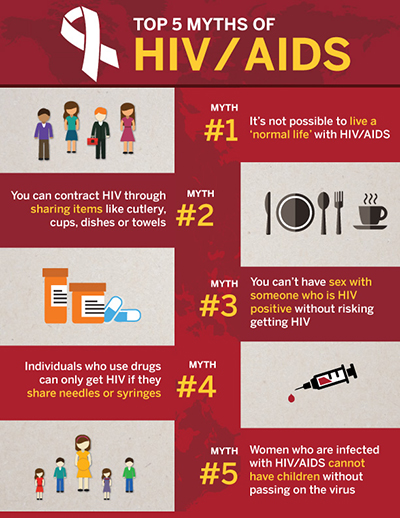 Myth 1: It is not possible to live a ‘normal’ life with HIV/AIDS

If an infected individual actively takes anti-retroviral medications, viral loads and the progression of the illness can be prevented.

“A lot of people think HIV/AIDS is a ‘death sentence’,” said Dr. Silverman. “An important point is that HIV/AIDS is eminently treatable. The treatments are well tolerated and most people have no side effects. As long as people get medical care and take their tablets, they can live a normal, healthy life.”

Myth 2: You can contract HIV through sharing items like cutlery, cups, dishes or towels

HIV cannot be transmitted through coming in contact with items used by individuals infected with HIV/AIDS.  This is a widely debunked claim, but Dr. Silverman says people still avoid individuals with HIV/AIDS for fear of transmission.

“People fear catching HIV/AIDS from those who are infected, and so they avoid contact with them. This causes terrible stigma,” he said. “You cannot get HIV from sharing cutlery, cups, dishes or towels.”

Myth 3: You can’t have sex with someone who is HIV positive without risking getting HIV

Dr. Silverman says individuals infected with HIV who are also consistently taking medication and have an undetectable viral load cannot spread HIV through sex. This is referred to as ‘U =U’, or undetectable is untransmitable.

“People who are not infected with HIV can also take medications called PrEP, daily or prior to sex to dramatically reduce their risk. Finally, condoms remain very effective at reducing risk,” said Dr. Silverman.

Myth 4: Individuals who use drugs can only get HIV if they share needles or syringes

“The fact is that sharing drug preparation equipment, like cookers and filters, can also cause HIV transmission. This is a major problem in our community,” he said.

Myth 5: Women who are infected with HIV/AIDS cannot have children without passing on the virus

“Vertical transmission between a mother and child is preventable,” said Dr. Silverman. “As long as the mother is tested early during pregnancy and put on medications, we should be able to prevent all babies from getting HIV.”

Dr. Silverman established the Positive Care Clinic in Whitby, Ontario (the regional HIV/Hepatitis clinic) and the Durham Regional Tuberculosis Clinic in Ajax. Formerly, he has worked as a consultant in Infectious Diseases at Rouge Valley Hospital and Lakeridge Health. Dr. Silverman was also Director of Infection Control at the Henry Ford Hospital, in Detroit, Michigan from 2004 to 2005.