Our Distinguished Lecturer will be Dr. Paul Allison, Faculty of Dentistry, McGill University 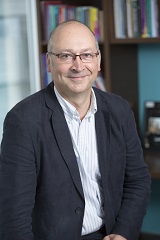 Dr. Allison gained his dental degree (BDS) from University College London (UK) in 1986. He then pursued specialist training in oral and maxillo-facial surgery and in dental public health and in 1994 moved to McGill University in Montreal and completed his PhD in 1998. He became a professor at the Faculty of Dentistry, McGill University, in 1999. He became Director of the Quebec-based Oral and Bone Health Research Network during the period 2005-08 and served two five-year mandates as Dean of the Faculty of Dentistry at McGill during 2008-18. He was President of the Association of Canadian Faculties of Dentistry during 2015-19 and is currently President of the Canadian Academy of Health Sciences. He is also currently a member of the Board of the Canadian Council of Academies and on Governing Council of the Canadian Institutes of Health Research.

Dr. Allison’s research interests include psychosocial and social determinants of oral health and oral health care, including issues of access to health care. His research has particularly focused on people with head and neck cancer, with Down syndrome, young children and other vulnerable groups. In 2014, he chaired a CAHS panel that published a report on improving access to oral health care. Most recently, he was an author in a The Lancet series on oral health (www.sciencedirect.com/science/article/pii/S0140673619316393).